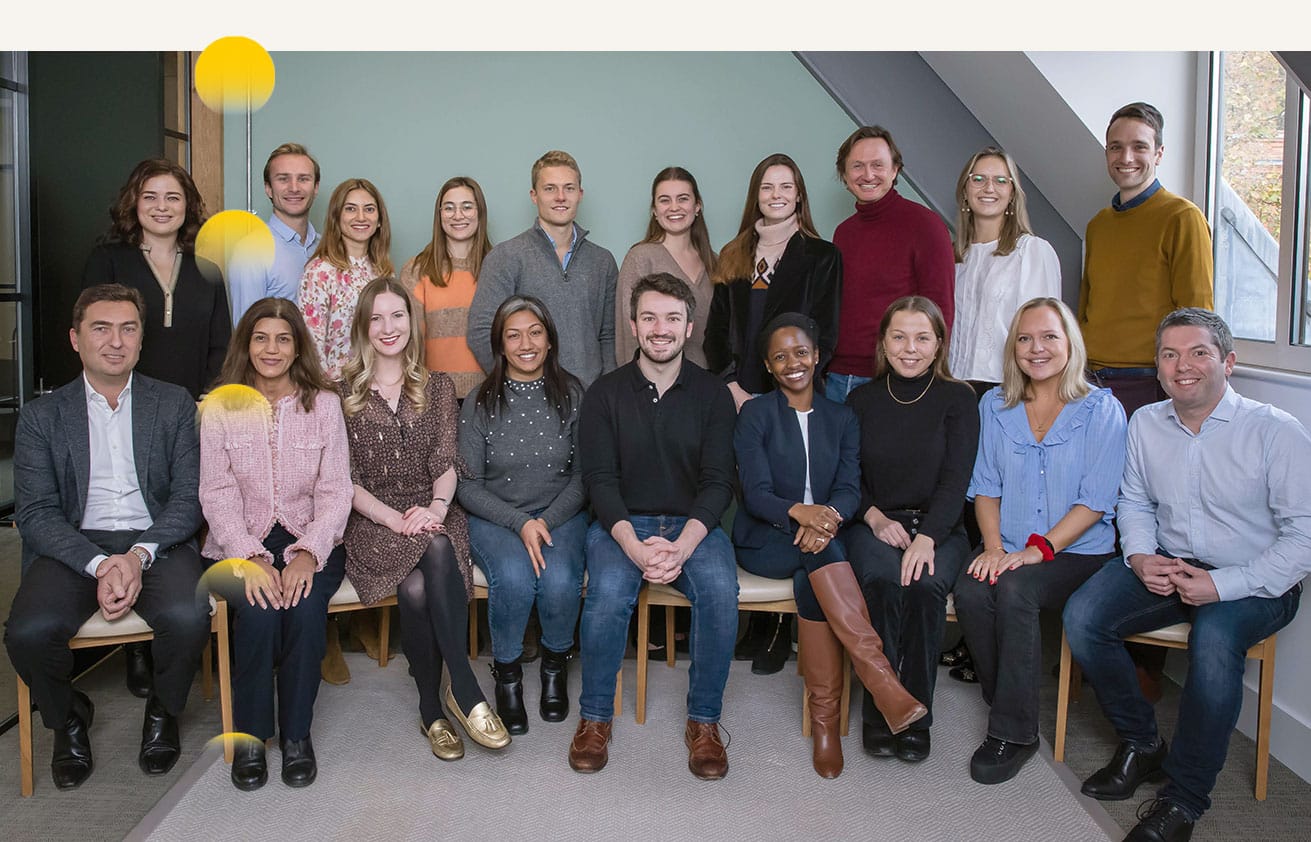 Avalon Lee-Bacon joined our team as Head of Talent, to support our portfolio companies with senior hires and developing their top talent, and Alix Fawcett joined as Marketing Associate.

Our Partner Mina was named one of Venture Capital Journal’s rising stars of 2021!

We invested in Granulate’s $30m Series B. Our Partner Evgenia shared why we invested in the real-time continuous optimisation platform, and how it’s revolutionising the world of cloud infrastructure.

Our Associate David was included in Sifted’s list of Europe’s top 30 young VCs!

We invested in LeanIX, who acquired our portfolio company Cleanshelf, and our Partner Mina shared why we’re so excited to be part of the continuous transformation platform’s journey ahead.

We led CluedIn’s $15m Series A, with Mina sharing why we invested in the game-changing master data management platform.

We also participated in BRYTER’s $66m Series B led by Tiger Global, having co-led the no-code automation platform’s Series A in June 2020.

Our VP Shamillah was included in the Forbes 30 Under 30 list for Finance!

We led Copper’s $50m Series B. Our Principal Dan shared why we’re so excited to be partnering with their impressive team as they provide the custody and settlement infrastructure needed to quickly and securely trade cryptocurrencies.

We participated in the $30m Series B of Divido, Europe’s leading retail finance platform, as well as the $60m Series D of document management platform Templafy, having welcomed both companies to the Dawn family in 2018.

We co-led Ably’s $70m Series B. Our General Partner Norman shared how we will be supporting Ably’s team to deliver on their ambition of powering every real-time experience.

We were thrilled to announce the promotions of Mina to Partner and Dan to Principal, recognising the significant roles they have played in our success and journey to date. Read more about their paths to Partner and Principal.

We also joined leading pay and automation platform, Soldo’s $180m Series C, having first invested in 2019. Our General Partner Josh shared why we believe there are only brighter things ahead.

We participated in Dataiku’s $400m Series E round, led by Tiger Global. We first invested in the enterprise AI powerhouse in 2018, joining them on their mission to systemise the use of data for businesses everywhere. Now at a $4.6bn valuation, and serving 450 customers, our General Partner Evgenia shared more on our partnership.

We also participated in Gelato’s $240m round. We first invested in Gelato a decade ago and have watched Henrik Müller Hansen and Gelato’s team build the global on-demand print platform powering the creator economy.

We were excited to announce the promotion of Evgenia to General Partner, making her the youngest woman promoted internally to GP in Europe! As a core member of the Dawn family Evgenia has led our investments in some of Europe and Israel’s top B2B SaaS companies, including Dataiku, Soldo, BRYTER, Harbr, Granulate, and Firebolt. Read more about Evgenia’s journey to General Partner.

We led Billie’s $100m Series C – the largest to date in the B2B “buy now, pay later” market. Having first met founders Matthias, Christian and Aiga in 2019, our General Partner Josh has shared why we were immediately impressed by their vision to bring frictionless B2B payments to every merchant and business.

We invested in Swimm’s Series A round, joining them on their journey to empower developers with better technical documentation. Evgenia explains why we’re thrilled to partner with the team as they push this huge, growing market even further.

Localisation management platform Lokalise joined the Dawn family, as we invested in its $50m Series B. Our partner Mina shared how we got to know the team, and why we are joining them on their mission to accelerate localisation from code to delivery.

We welcomed Pierre Bricault to the team as an Associate, joining us from Luko, the Paris-based insurtech startup reinventing home insurance. At Dawn Pierre will look for the new European software champions, with a particular focus on France.

E-commerce Needs another Revolution: Meet the Companies Leading It

Here are 23 startups in areas like AI, robotics, and quantum primed to take off in Europe’s $711 billion deep tech industry, according to VCs

Supercharging hybrid work: Why we invested in RPA Supervisor

Borderless tax compliance: Why we invested in Fonoa

Engineering the headless e-commerce revolution: why we invested in Medusa

Trust & Safety for a social internet: Why we invested in Checkstep

Dan Chaplin included in Forbes 30 under 30 for finance

How to beat the competition for tech talent

POWER PLAYERS: 18 women to watch in 2022 who made partner or higher in Europe’s male-dominated VC ecosystem

Firebolt, a data warehouse startup, raises $100M at a $1.4B valuation for faster, cheaper analytics on large data sets

From web3 to climate and health tech: The tech trends and companies to watch in 2022

Swimm nabs $27.6M Series A to include up-to-date documentation throughout coding process

A top Israeli VC names the 15 startups to watch

The state of quantum: The race for supremacy is well and truly underway

The immense opportunity of the life sciences data market

The fintech crew in vanguard of a revolution

The Berlin startups and scaleups to watch in 2021

The one thing every board member needs to know

Europe’s fintech M&A ‘boom’: What the data tells us

Collibra named in the Forbes Cloud 100 for fifth consecutive year

The hottest startups in Berlin

Reflecting on an incredible first half of the year

What every founder needs on their board

Realtime data startup Ably counts Bloomberg and Hopin among its customers. We got a look at the pitch deck it used to raise $70 million

Here’s why Visa made its bold play for hot open banking fintech Tink in a $2.15 billion acquisition after its Plaid deal fell apart

Fintech valuations keep tripling, is it a trend or just a coincidence?

The Nordic startups and scaleups to watch in 2021

Europe’s 16 most underrated fintechs, according to VCs

One year on, the three pillars underpinning B2B SaaS

Introducing the next generation of dev tools

Forbes under 30 Europe: The newcomers rethinking finance during the time of a global pandemic

LeanIX — why we invested

European VCs are still wary of joining the SPAC goldrush

How Israel is building the model B2B SaaS capital

Developers are the new rockstars of SaaS. You either sell through or to them

21 European SaaS startups set to boom in 2021, predicted by VCs

The European fintechs to watch in 2021

Dawn Capital predicts the categories that will break out in 2021

‘The Netherlands’ startups and scaleups to watch in 2021

Granulate nabs $30M for software to optimize workloads and latency

UK tech startups and scaleups to watch in 2021

Finances on autopilot: How do we get there?

Team Dawn predictions: The categories that will break out in 2021

We asked 12 prominent European tech investors to pick out fintech startups they think will blow up in 2021. Here are the 20 they chose.

Startup Spotlight: The top 50 London tech firms to work for

Making acquisitions in a time of crisis

TOP 50: Europe’s most influential women in the startup and venture capital space

Fundraising during coronavirus: Are startups screwed?

London-based Eigen Technologies closes Series B round at $42 million

VC predictions: What do you think the UK IPO landscape looks like for fintechs in 2020?

It’s chips, not the cloud, that will save banks from the hackers of the future

UK Tech 100: The 100 most influential people shaping British technology in 2019

TOP 50: Europe’s most influential women in the startup and venture capital space

An easy sell: doubling down on Showpad

Our investment in Templafy, the enterprise platform for brand integrity and compliance

Stay in touch with us